On the road with Allan doing a survey of how bad the Air Brake Treadle Valve Problems are and to help all truckers understand the dangers of the valve.

If the Government is so interested in stopping accidents from happening on the roads and highways why don’t they look at what is causing the accidents to happen instead of blaming the problem on the drivers?

Below are pictures of Treadle Valves Allan took while the trucks are in route to deliver a load. These trucks are being used every day on the roads and highways.

The picture of the valve above is setting idle waiting to cause an accident. The rust in the pin and the corrosion that is built up in the treadle valve!!!!!!

Today the Treadle Valve is causing accidents on the roads and highways. The same highway or road that many  people drive on and their family’s. FMCSA has known about the problem for years and has not taken any advance action to stop the problem. The NHTSA and NHTSB has issued bulletins and recalls starting back in the 1970’s and still issuing them today. CVSA has done a bulletin on the problem. The surveys that Allan has done over the last 8 years show that over 80% of the valves in trucks on the roads have corrosion or debris inside of the Treadle Valve.

The driver of the car hauler, hauling over $200.000.00 dollars of new AUDI cars, was lucky when he notice his back tires on the trailer starting to smoke and was able to get the truck and trailor to the side of the road with out the other trucks from behind hitting the trailor in the back causing an accident. The accident was caused by the treadle valve plunger sticking in the center position and not returning all the way back in the up position. The accident happen 10/29/2014 on Interstate 55 in Missouri. 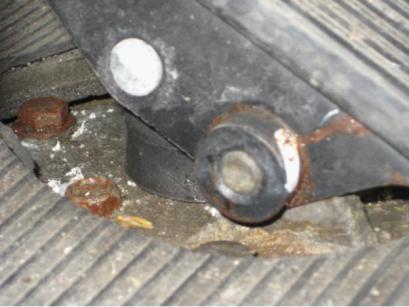 Notice the rust and the corrosion around the housing the back of the pin and the plunger both are ready to cause an accident here!!!!

How many accidents will have to happen and how many drivers must die before the government will help stop the defective product.

I ASK HOW MANY PEOPLE HAVE TO DIE BEFORE THE GOVERNMENT WILL TAKE NOTICE OR DOES IT TAKE A STAR TO BE HURT OR KILLED FIRST!

WHEN IT KILLS EVEN THE PEOPLE THAT HELP PROTECT US THERE IS A PROBLEM!

Allan meets with FMCSA Administrator ANNE S. FERRO in March 2014. Discussing the issue with the Treadle Valve problems and the accidents it is causing.  Anne Ferro stated,” there will be someone contact you by next week over the Treadle Valve problems.”  As of today no one has contacted Allan back at this time!!!!!  Allan ask FMCSA, “If you are so interested in what is causing the truth about accidents why not contact ALLAN back?”